You know what they say about the best-laid plans...

For weeks now, I have been planning a resurrection (of sorts) for this blog during Lent this year.  I had (and still have, I suppose) grandiose plans of posting every day during Lent about something related to Catholic news, my own Lenten reading, and the like.  I was planning to make my bold foray back into the blogging world with an introductory post on Shrove Tuesday (tomorrow).

And then this morning's news hit.  So, here is a precursor to my Lenten blogging.

Following my initial period of disbelief (which lasted for the better part of the morning), I have been alternating about every half hour between being on the brink of tears and being supremely confident in the Divine Will.

Right now I am the former, so here are reasons why I am sad today, in no particular order: 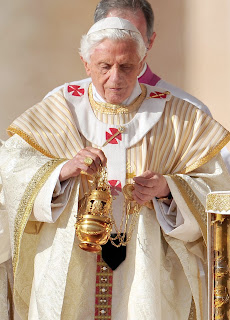 And yet, in the midst of my sorrow, I know that we have reasons to hope:

The comment I have seen most often today is that Benedict's resignation demonstrates his deep humility.  To quote one of my favorite bloggers, "he leaves as he came, with a humility that shocks the world."  And that's really what our Christian life is all about, isn't it?

I hope that we will all learn from this great man how to do justice, love goodness, and walk humbly with our God -- and trust in our Lord Jesus that the gates of hell shall never prevail against our Mother Church.
Posted by Unknown at 11:39 PM

My Friends With Blogs